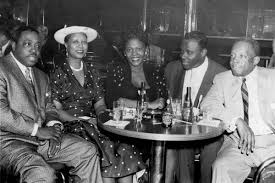 Did you know Taylor was one of the stops on Chitlin' Circuit. The "Chitlin Circuit" is the collective name given to performance venues throughout the eastern, southern, and upper mid-west areas of the United States that were safe and acceptable for African American musicians, comedians, and other entertainers to perform in during the era of racial segregation in the United States (from at least the early 19th century through the 1960s).

Taylor having one of if not the top R & B  radio spots during that time period brought a lot of music through this small town. Back in the day when you released a record. The way you promoted it was to get top radio personalities to play it. No social media back then. Tony Von being one of the top radio personalities and promoters in Texas during that time had a lot of artist come through Taylor.

There were 3 main clubs (or juke joints as they use to call them) plus O.L. Price Gym in Taylor during that time where the artist would play. The Chicken Shack was on the corner of Dolan and Walnut (now MLK). In front of where the pavilion is now. It was the largest of the three clubs and the top artist played there because of the capacity. The High Life Club was the most popular and it was located on the line.  Then there was the One Acre Club which came later and it was located behind the auction band in Circleville. B.B. King performed here. Another reason for Taylor Club popularity was that soldiers from Camp Swift in Bastrop and later Ft. Hood (after they allowed African American soldiers there) frequently visited the area on weekends. I have had a lot veterans from that time period tell me that where ever they were around the world when other soldiers would find out they were from Taylor they would ask about Tony Von or The Line.

Some of the artists that use to come through Taylor were James Brown, B.B. King, Johnnie Taylor, Little Richard, Etta James,  Joe Tex, Wilson Pickett, Bobby Blue Bland, Ike and Tina Turner and many more. I remember when Joe Tex played at O.L. Price gym and his song Skinny Legs and All was out. He had a skinny legs and all contest. I have an interview coming soon with one of the contestants and will announce the winner of that contest.