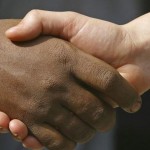 Integration was a double edged sword. Integration in Texas legally happen after the 1964 Civil Rights Act. The Texas school system did not integrate until 1965. Even after the 1954 Supreme Court ruling of Brown vs Board of Education was passed it took 10 more years for Texas Schools to come on board. The Mansfield Incident was he nation’s first example of a failure to enforce a federal court order for the desegregation of a public school. Texas Governor R. Allan Shivers, who opposed the Brown decision, called out the Texas Rangers at Mansfield to prevent any black students from entering the public school.  Shivers ignored the federal court order for integration by authorizing Mansfield ISD to send its black students to Fort Worth, Texas.

The good thing about integration was the opportunity to go into the front door of businesses and a few more opportunities. Also for our schools not getting old  books with the previous names covered up that had been passed down from the white schools when they got new ones. We met new friends and realized that their were some white people who saw us as equal .

The bad thing was the black community lost it since of community. Businesses closed and the cohesiveness of the neighborhoods eroded. We will have some video coming soon to explain different point of views on why this happened !