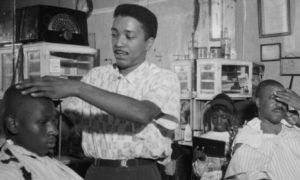 African American owned barber shops played a central role in African American public life. The intimacy of commercial grooming encourages both confidentiality and camaraderie, which made the barber shop an important gathering place for African American men to talk freely. It was a safe place black men go and just talk.  They talk about religion, politics, sports, relationships, and life as seen through the eyes of the black man.

The two barber shops I remember were Papa Charlies on Dolan Street across from the Chicken Shack (now the Pavillion). Then there was the Square Deal Barber shop on The Line (Walnut St.).

I remember Papa Charlie use to like to take him a little nip before he started on your hair. I also remember him putting a chilli bowl on your head and cutting around it.

Square Deal was where most people went. The barbers I remember there were Mr. Tommy Garner Sr., Mr Tom Robinson and Mr. Artis Caldwell. Going inside that barbershop on Saturdays was so much fun. Hearing the men talk about everything. Then they would encourage the young boys and men to reach for the skies with whatever  you wanted to do in life. Afterwards we would go to Jimbo’s Cafe and get some of the best barbecue I have ever had.